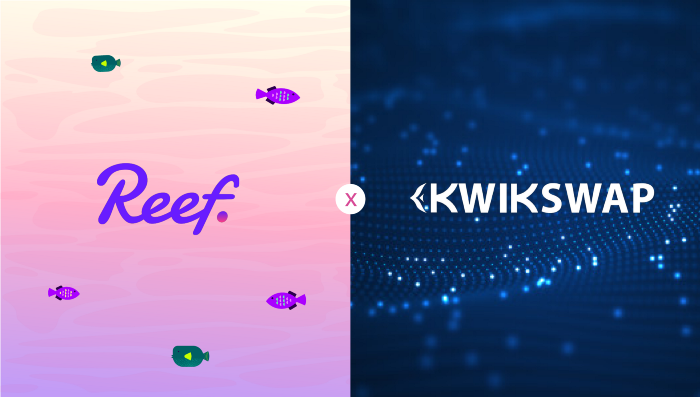 Reef is delighted to welcome Kwikswap into its growing ecosystem, as it becomes the first project to build on the Reef Chain. Kwikswap is a prominent building block of Layer 2 DeFi with a lightning-fast decentralised swap exchange protocol.

Much like Uniswap, KwikSwap enables other developers to build on its API’s and dApp UI and source code which can assist in extending the reach of the protocol. By building on the Reef chain, Kwikswap will be able to leverage Reef Chain’s high scalability and higher throughputs while minimizing the gas fees encumbered by the users.

Kwikswap is a revolutionary cross-chain swap protocol with Layer 2 scaling that allows users to utilize the platform for swapping, market creation, providing liquidity, and staking. It enables the creation of token markets, own KWIK tokens, and on-custodial wallet connections.

On the other hand, Reef is the gateway to DeFi through liquidity and protocol aggregation, proprietary analytics, and multi-chain accessibility. It is secured under Polkadot’s shared security model, ensuring high resilience and forkless upgradability.

Reef has higher throughputs and scalability than Ethereum and allows for porting of existing DeFI apps from Ethereum to Reef chain through its solidity support. The Reef chain is self-upgradable with a cutting-edge Liquidity Bridge being in the works.

Value proposition of the Kwikswap-Reef partnership

This collaboration thus makes great sense as Kwikswap users would be able to trade assets at lightning-fast speeds with near-zero gas fees using the Reef chain. KwikSwap is developed on its own source code and its automated token exchange on the Reef chain will feature

Kwikswap’s liquidity mining will go live soon as well. In addition, Reef has provided a grant for the Kwikswap team through its Reef Developer Program. Reef is absolutely ecstatic to be ushering in a new era of Layer 2 DeFi alongside KwikSwap!

“The dev teams and myself at Kwikswap are super excited to have the opportunity to partner with Reef to be the first DEX built on Reef Chain! We can’t wait to showcase Reef Chain in all its glory to the world and open our DEX on its mainnet! “ – James Lee

Kwikswap DEX is an all-new Cross-chain Automated Protocol on Ethereum & Polkadot incorporating Plasm & Acala Network Parachains. The Kwikswap protocol provides developers, liquidity providers & traders the opportunity to participate in a decentralized financial marketplace that is open and accessible to all. It also contains a launchpad and NFT Marketplace.

Reef is the first cross-chain DeFi operating system built on Polkadot. With a seamless user interface, Reef offers its users a smart liquidity aggregator and yield engine that enables trading with access to liquidity from both CEXes and DEXes while offering smart lending, borrowing, staking, mining through an AI-driven personalized Reef Yield Engine.